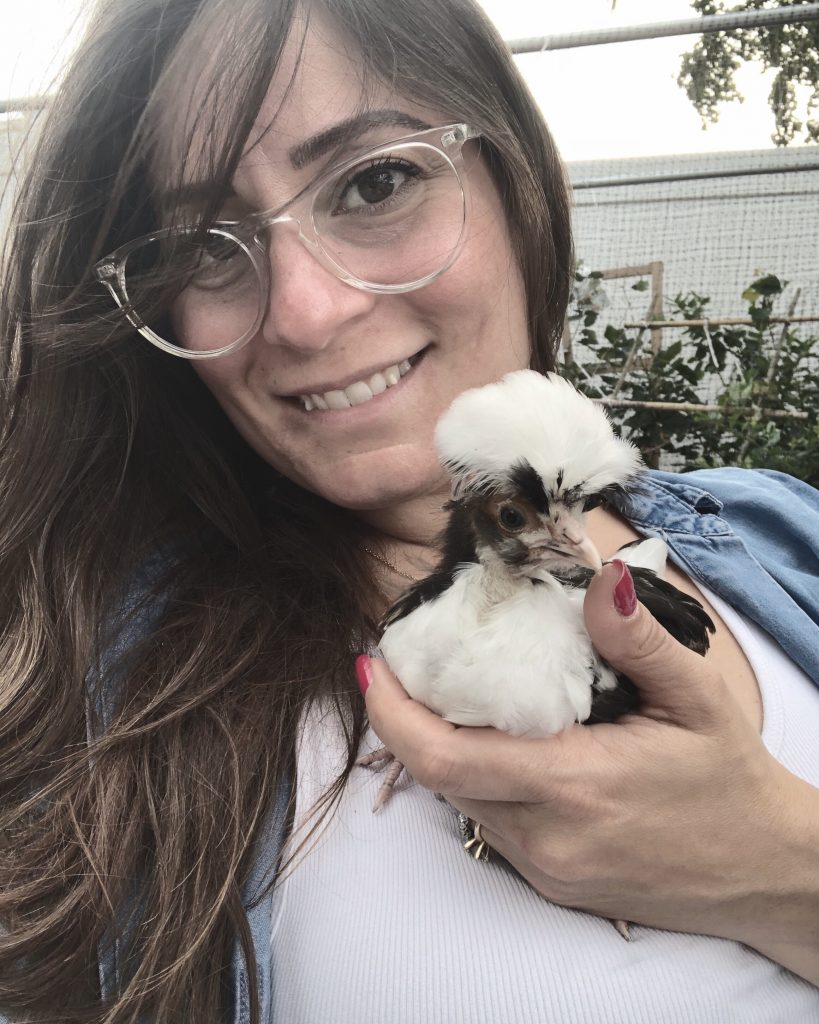 I can’t tell you exactly when it happened, but my husband (I SWEAR!) suggested we get some more chickens. I was wanting some Paint Silkies, and Good Chicken Violet was broody. Perfect timing, right? We’ll order some hatching eggs, slip them under her, and she’ll do the hard work for us!

It took us some time to find paint silkie hatching eggs. By the time the eggs arrived, we were concerned that the logistics just would not work out because Violet had been broody for two weeks. What if she were sitting on these eggs and decided to give up half way through? Or worse, what if we compromised her health because of this dumb idea? So we ordered an incubator. The plan was to let her incubate the eggs however long she felt she could. If she gave up, or her health declined, we had the incubator as backup. Solved!

The night the hatching eggs were all delivered, we went to check on the “dummy” eggs Good Chicken Violet had been sitting on for the last two weeks as a precaution prior to throwing them out. SURPRISE! All three eggs were fertile. And, they were Daffodil’s- who’s only mate is Lily Roo. WHAT are these babies going to look like? I was both terrified and excited. 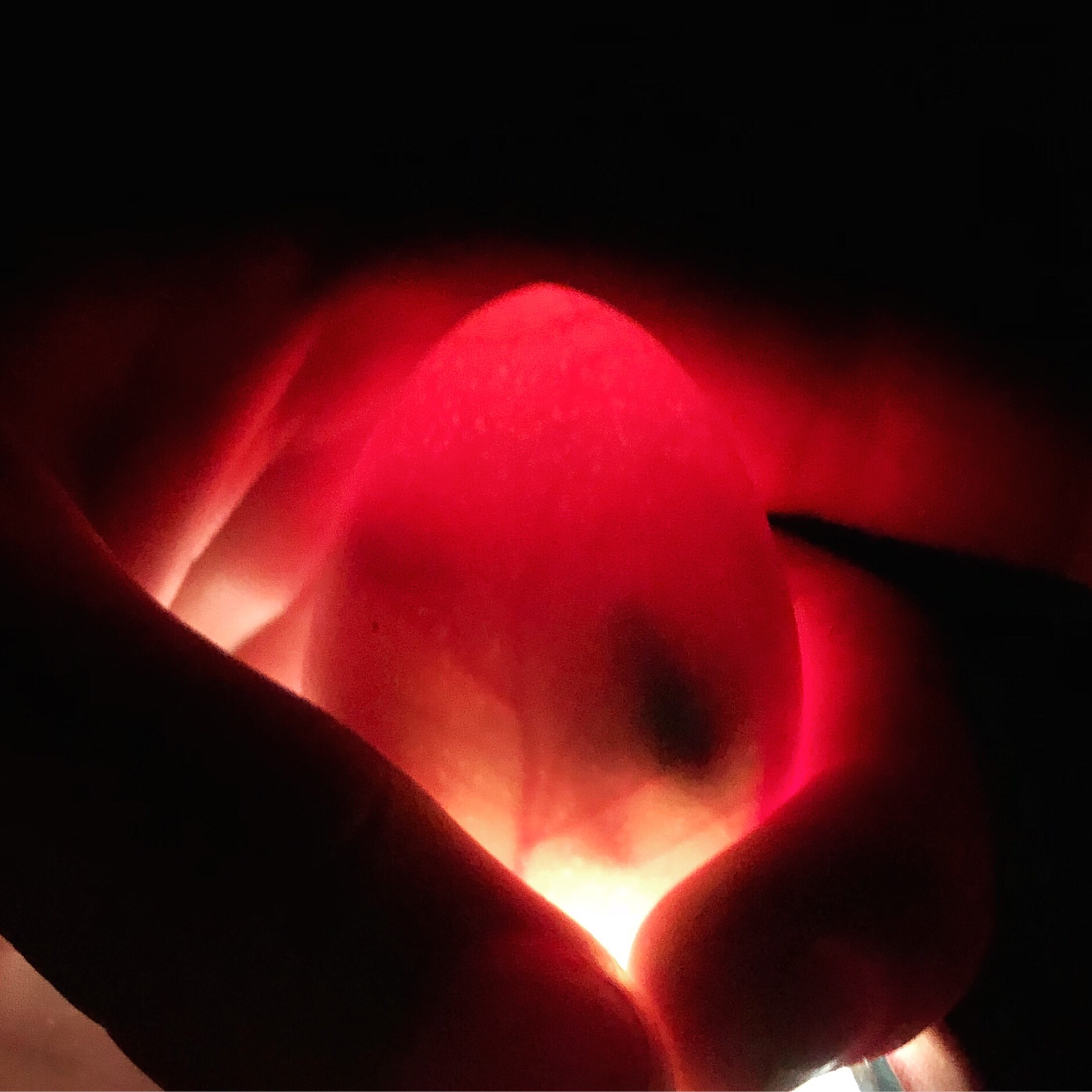 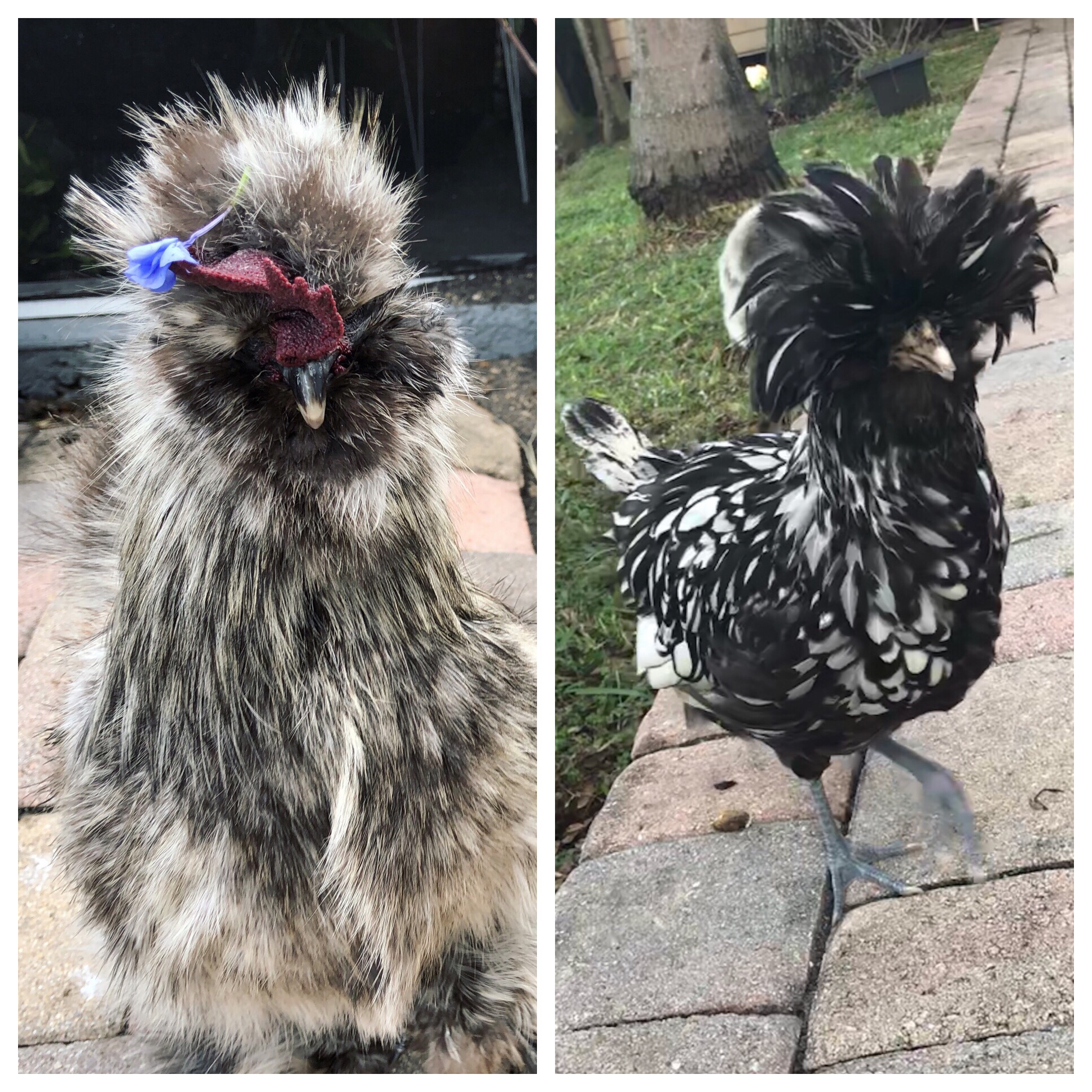 Poor tiny Violet could not possibly incubate 15 eggs (her three plus an additional 12). Further, the three she was sitting on had a head start on the hatching eggs that only just came in. We had no idea how to coordinate this mess with everyone coming out safe and healthy.

So our plans changed. We popped a total of 15 (9 Paint Silkie and 6 Tolbundt Polish) hatching eggs into our incubator and then settled in for an excruciating 7 day wait. On day 7, we learned two of the 15 weren’t developing- the rest were good! We were in shock. When we checked the next week, 1 egg was no longer developing, but everyone else was well on their way.

Day 14 was the first time we noticed that the air bubbles in the hatching eggs were different than the ones Good Chicken Violet was sitting on. That’s when we learned that you’re supposed to let shipped eggs “settle” by standing them upright so the air pocket can go back to normal after being jostled around during shipping. Commence panic. 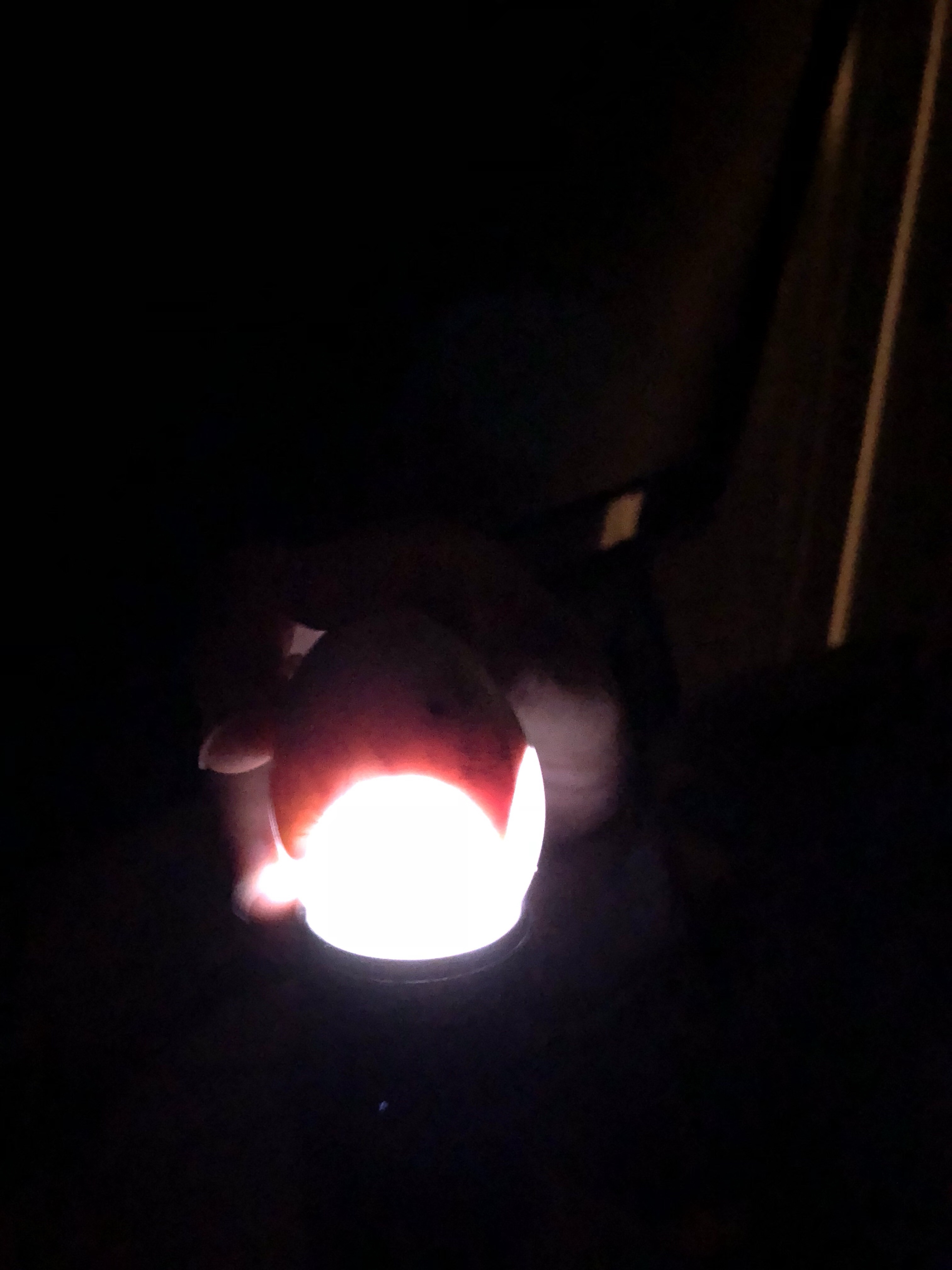 Are these chicks going to be shrink wrapped? Are we going to watch them develop for 21 days only to have them die while trying to hatch? What if I’m not home when they start to hatch and I can’t at least try and help? Is this going to emotionally scar me for the rest of my life?

But, nevertheless, these little babies persisted. They continued to develop and grow.

We completely miscalculated how long Violet’s eggs had been developing, because we woke up on a Tuesday morning to Bluebell! Violet’s very first peep to hatch! But alas, there was no time to celebrate because it was 7:30 a.m. and I had nothing to feed this chick, and nothing to give it water in. 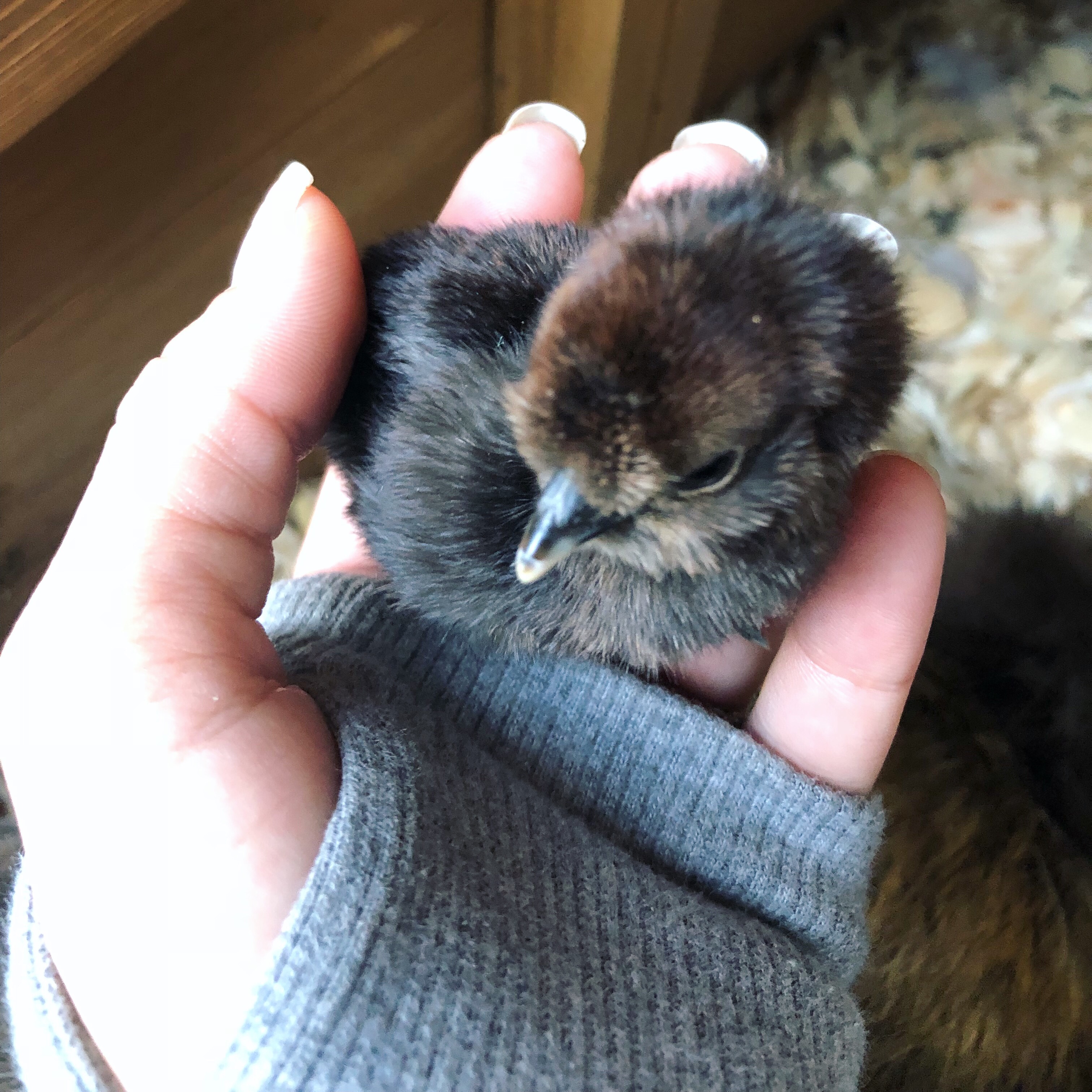 I left Violet and her lone peep with some layer crumbles and a jar lid filled with water and headed to work. I sped out the door at 5:00 on the dot to try and make it to our local feed store before the closed at 6. I made it just in the nick of time.

I saw Good Chicken Violet fervently showing Bluebell how to eat each time I’d poke my head into her little maternity coop. It was so cute to listen to her little noises and see this tiny little peep walking around. On day 3 after hatch, I checked in on Violet and noticed that Bluebell was really weak. I picked her up and her crop was completely empty- she wasn’t eating.

I brought her inside and made a mixture of water, raw honey, and starter feed and syringe fed her. I repeated this process every couple of hours and she started to perk up. We learned that chicks will often not eat dry crumbles, so you need to wet them to form a paste. Once I started wetting her feed, Bluebell ate us out of house and home.

Soon Sweet Pea and Buttercup joined Bluebell and Violet was finally able to rest. She got off her nest and walked around for a little while, but she seemed very weak. I was extremely worried about violet, so I started feeding her and her peeps scrambled eggs, and adding Poly Vi Sol without iron to her water. 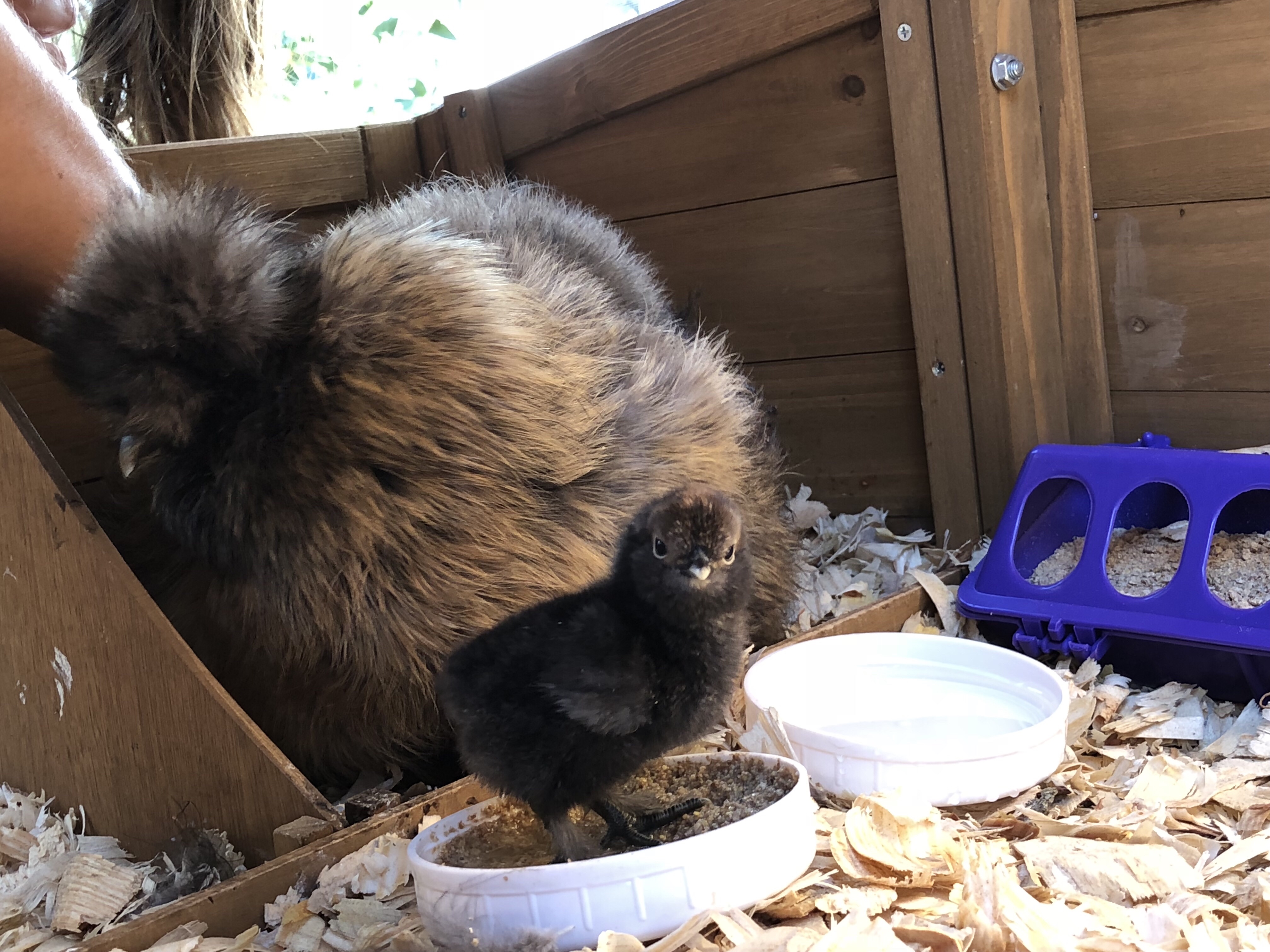 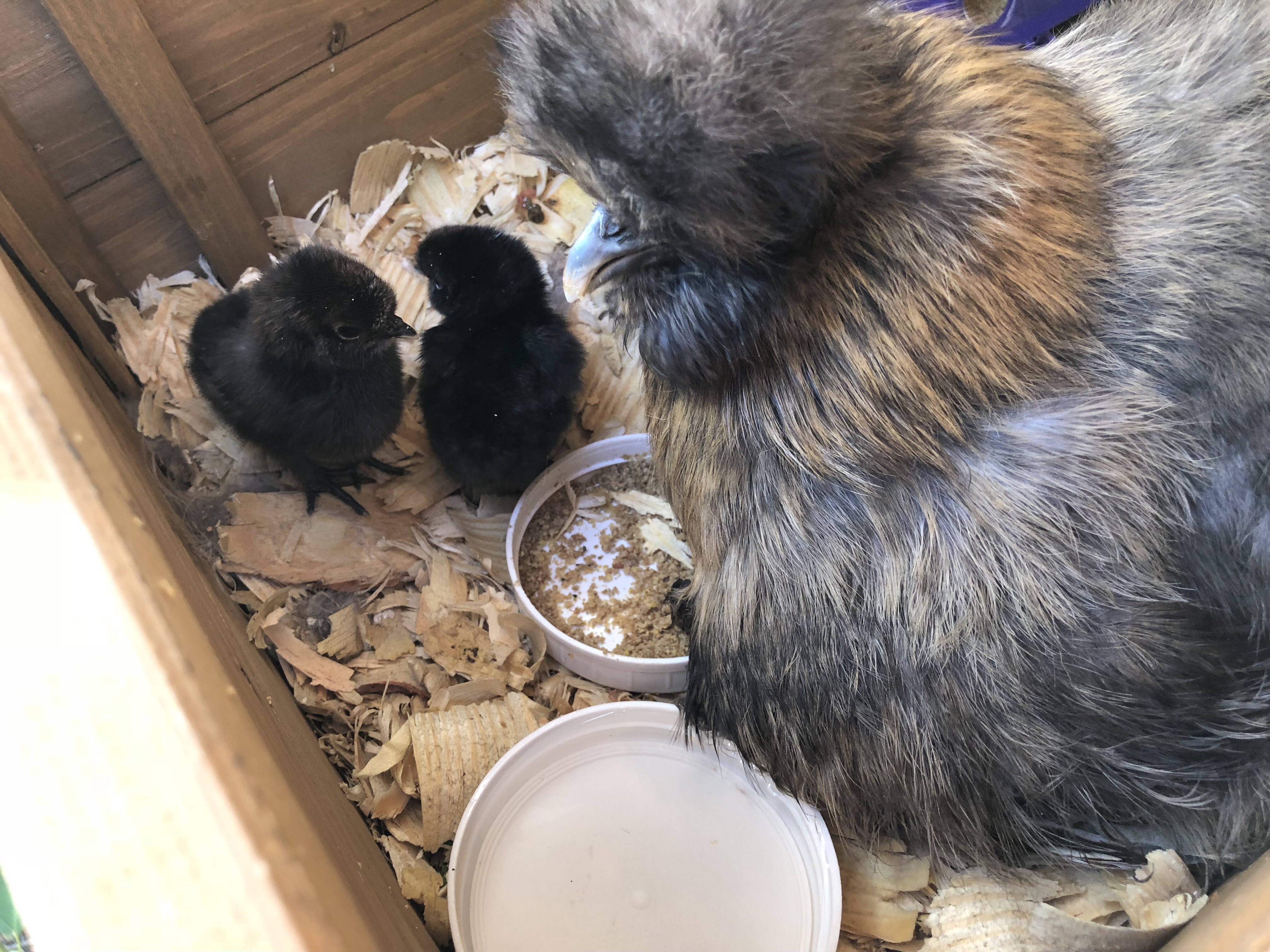 Did I mention during this same time we were having our entire roof redone, and building a much larger coop?

After about a week, Violet was starting to take her peeps out of the old, small coop. In order to get them used to the new coop we migrated all four of them into the bigger, newer coop during the day while the rest of the Flower Girls free-ranged. 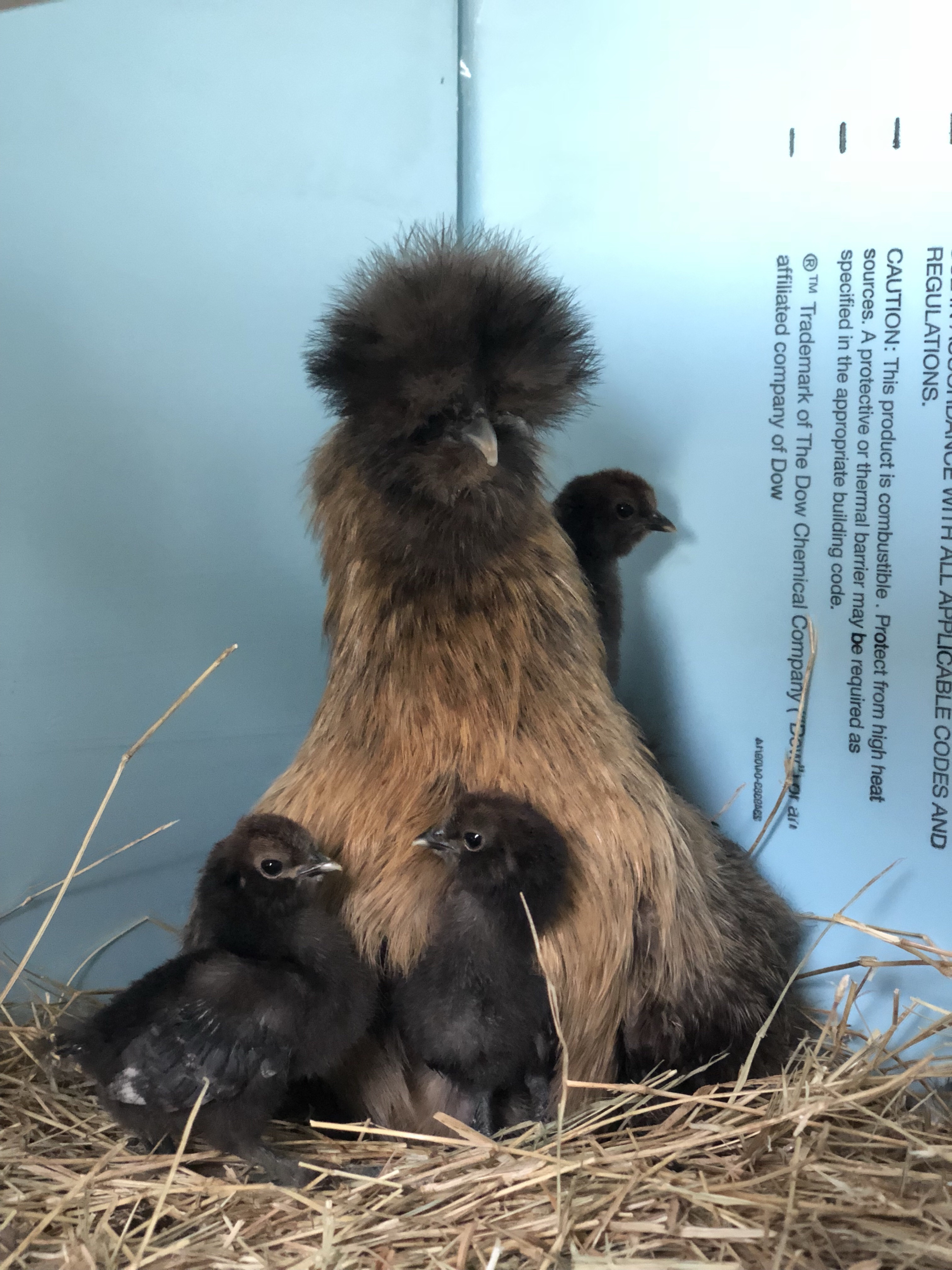 The first couple of days we kept the coop closed up because we were concerned about the Roosters reaction to the peeps. With us being gone all day, it simply wasn’t a risk we could take.

With the new coop closed up, the hens had to figure out a new spot(s) to lay. This was the highest stakes scavenger hunt I have ever participated in. An egg left in our heat for a few days could be disastrous. Where did they lay, you ask? UNDER the old coop. Let me clarify- under the two shipping palettes the old coop was sitting on. One of the hens even got stuck.

Now it was time to introduce the roosters to the peeps. Our head roo Daisy was first. He made a startled noise when he saw one of the peeps pop out from behind Violet, but then went about his business. Lily Roo went next (the father of the peeps), and it was love at first sight.

He stood very still and made a bunch of very odd noises, and then launched into a sweet purr and began showing them the food. They were climbing all over him- it was extremely sweet to watch.

But what about the incubator peeps? Well, we checked on them right before lockdown and they were all still developing and moving around- weird air bubbles and all. We closed the incubator, turned up the humidity, and set up a wireless camera so we could check in and see if any hatched.

The first peep to hatch was one of the Polish Crested. Man this little dude was ugly. Then, they all started to follow one by one. It took a total of 48 hours for all of them to hatch. It was all delightfully crisis-free- we even got to capture one of the hatches on video!

We waited until the last one was dry, and then moved them into a brooder. The plan was to have Good Chicken Violet take care of these peeps, too. 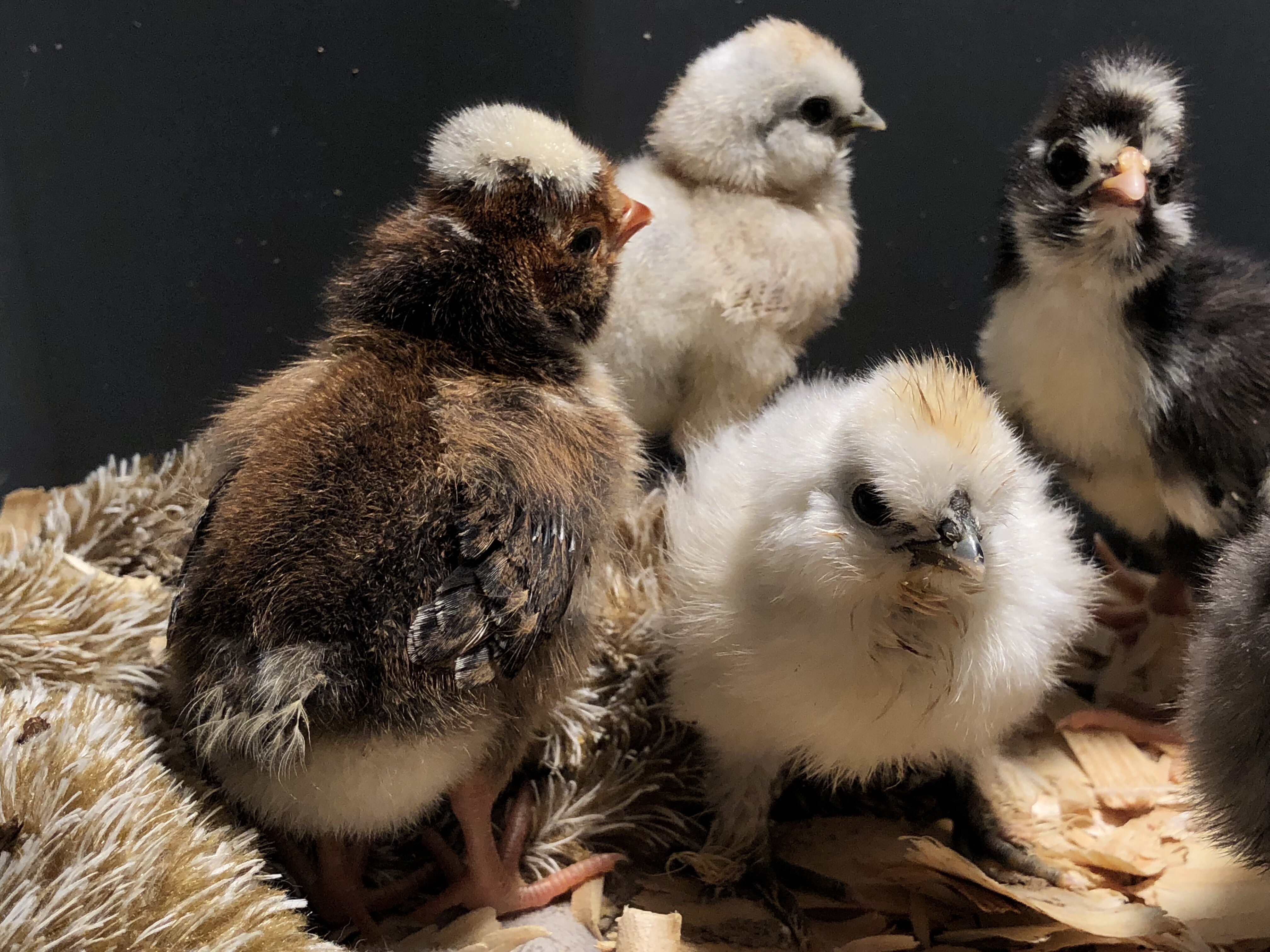 At night, we moved Violet and the peeps into the brooder with the new peeps. It took a couple of seconds, but she eventually settled in, spread out her wings, and let the new peeps snuggle under her.

In the morning, Violets peeps were hungry. She needed to get off of the new peeps to show her peeps the food. The new peeps weren’t having it, and she got frustrated. It was clearly not going to work out. I couldn’t risk her injuring any of these babies. So, Violet and her peeps went back to living in the big coop with the rest of the Flower Girls and the incubator peeps stayed in their brooder.

Comparing the two sets of peeps, Violet’s peeps developed much faster but were also less friendly than the incubator peeps. 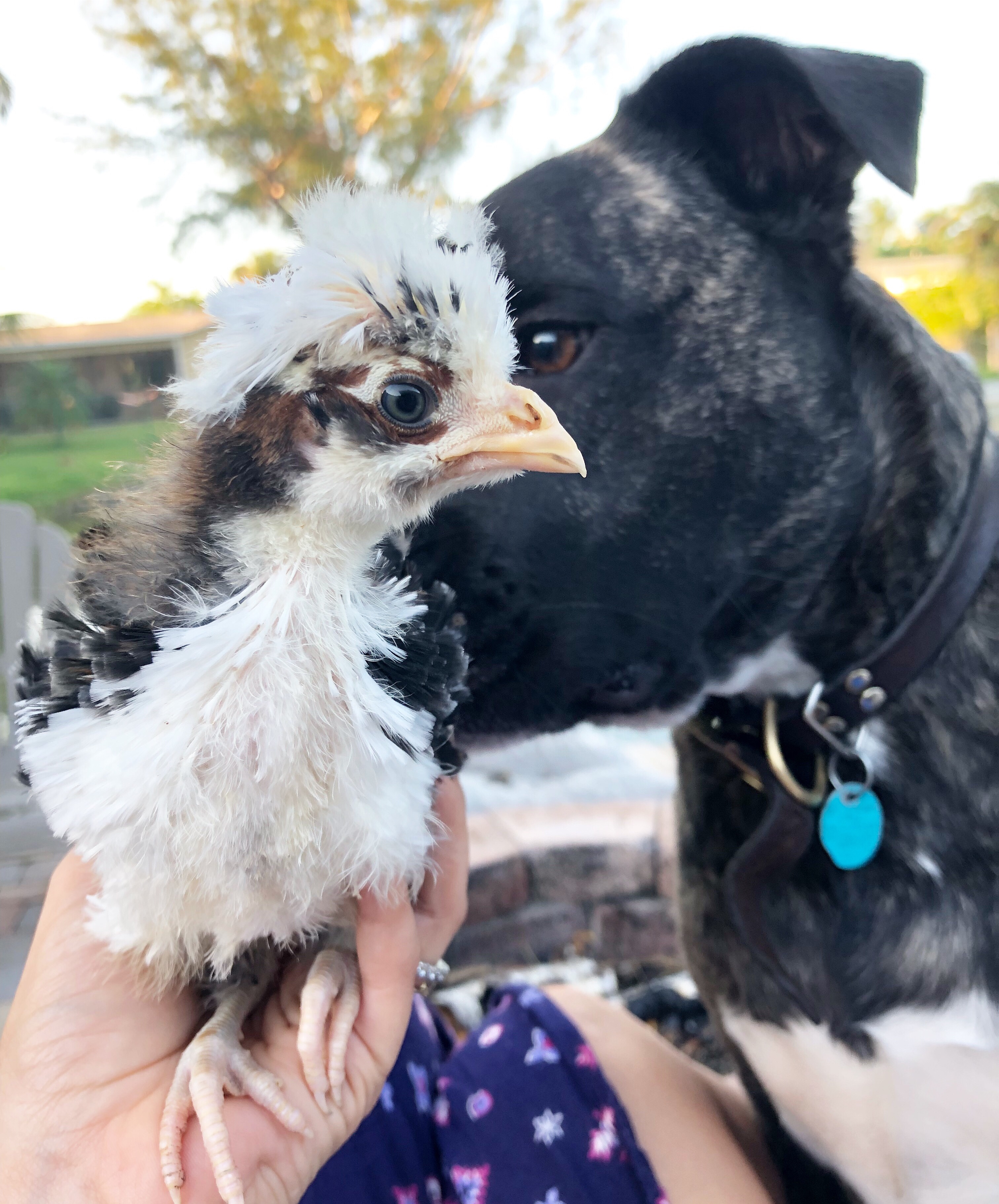 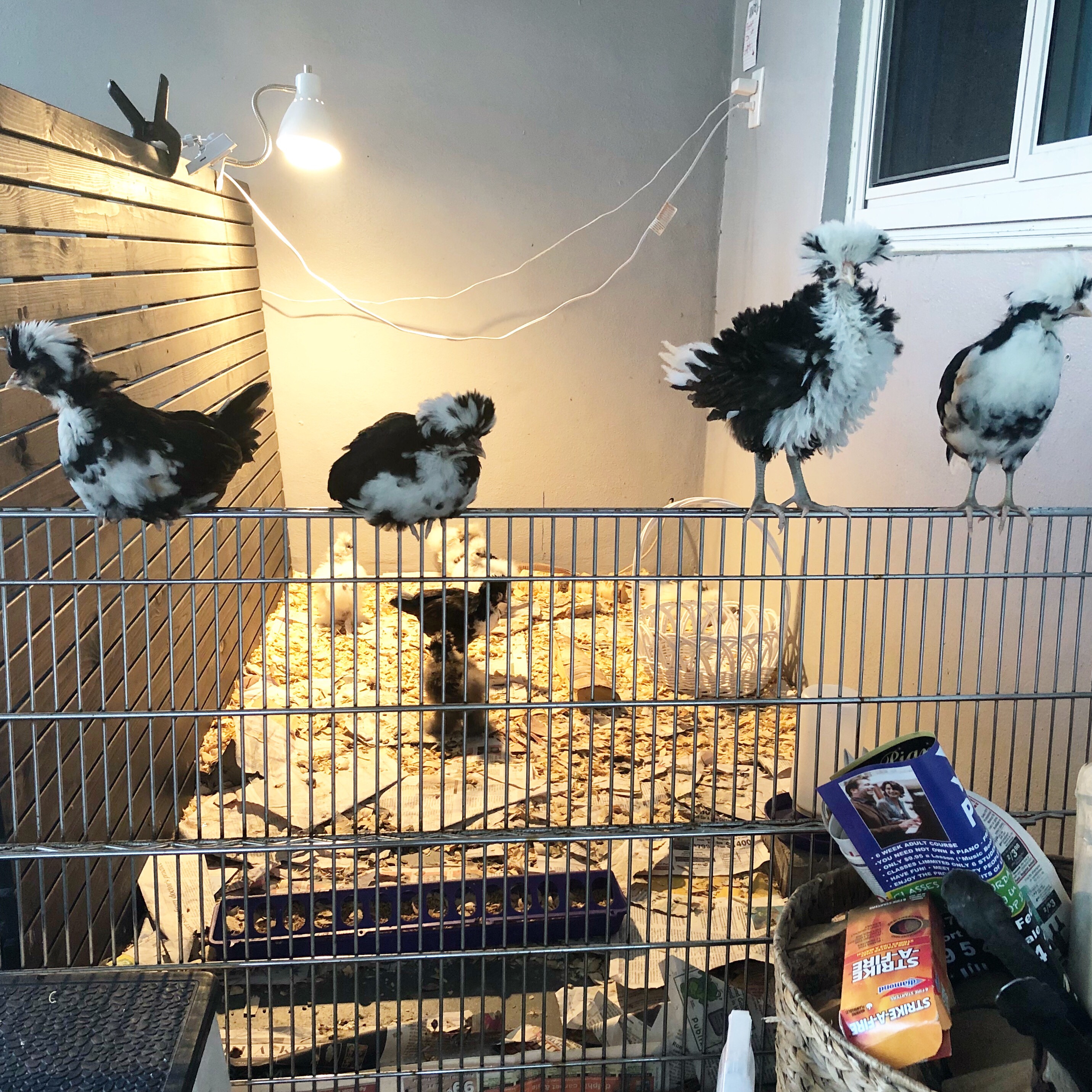 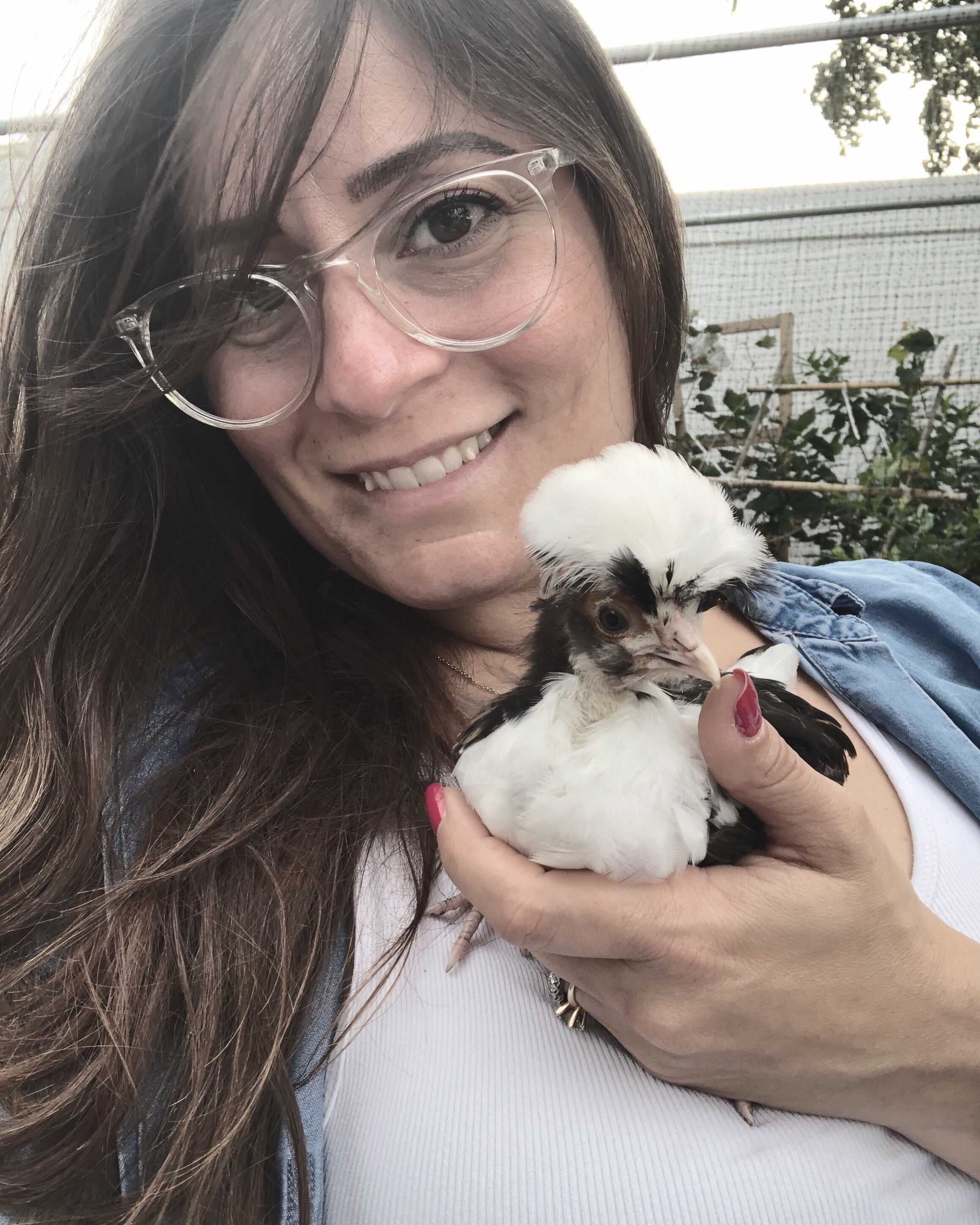 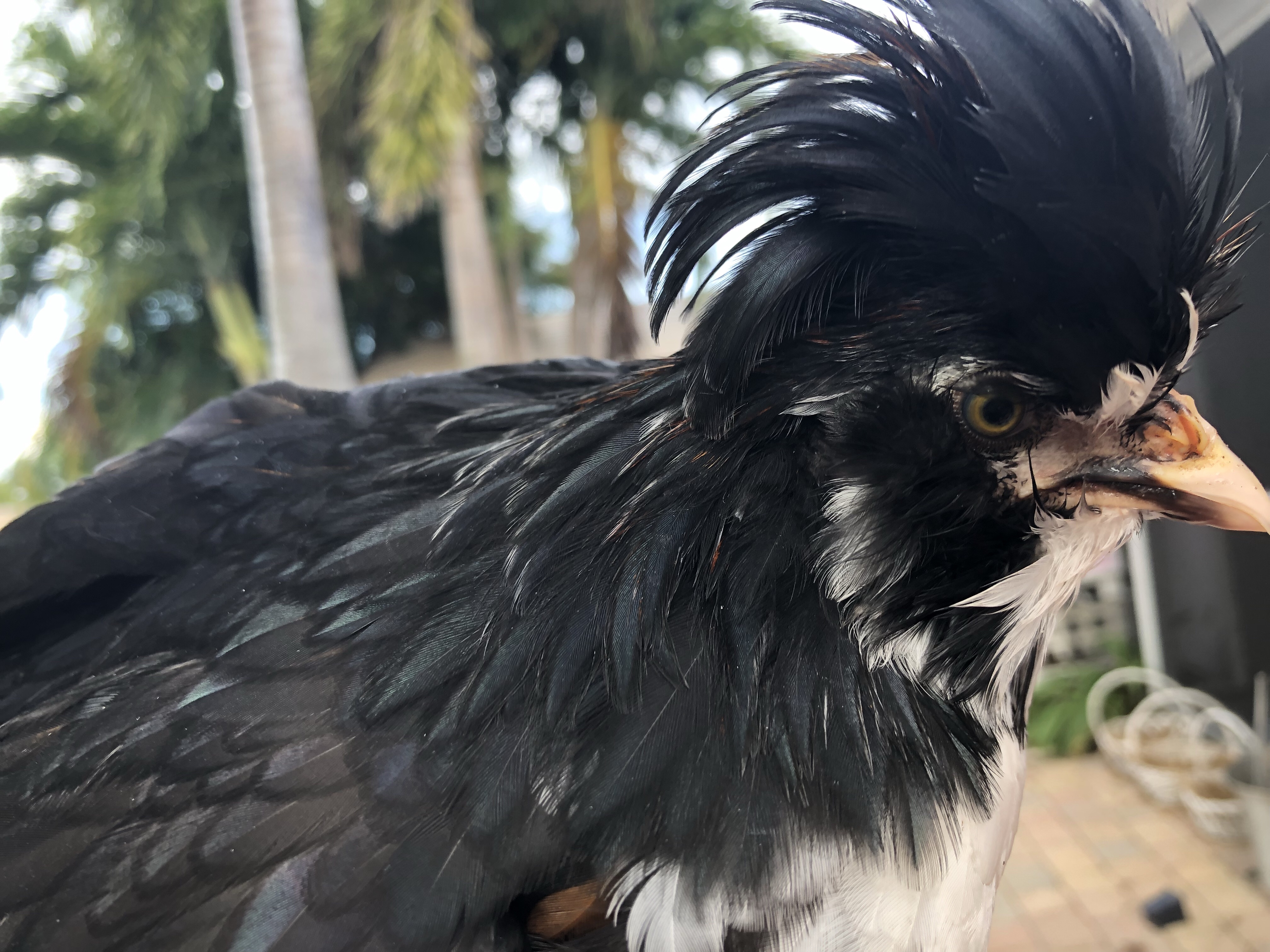 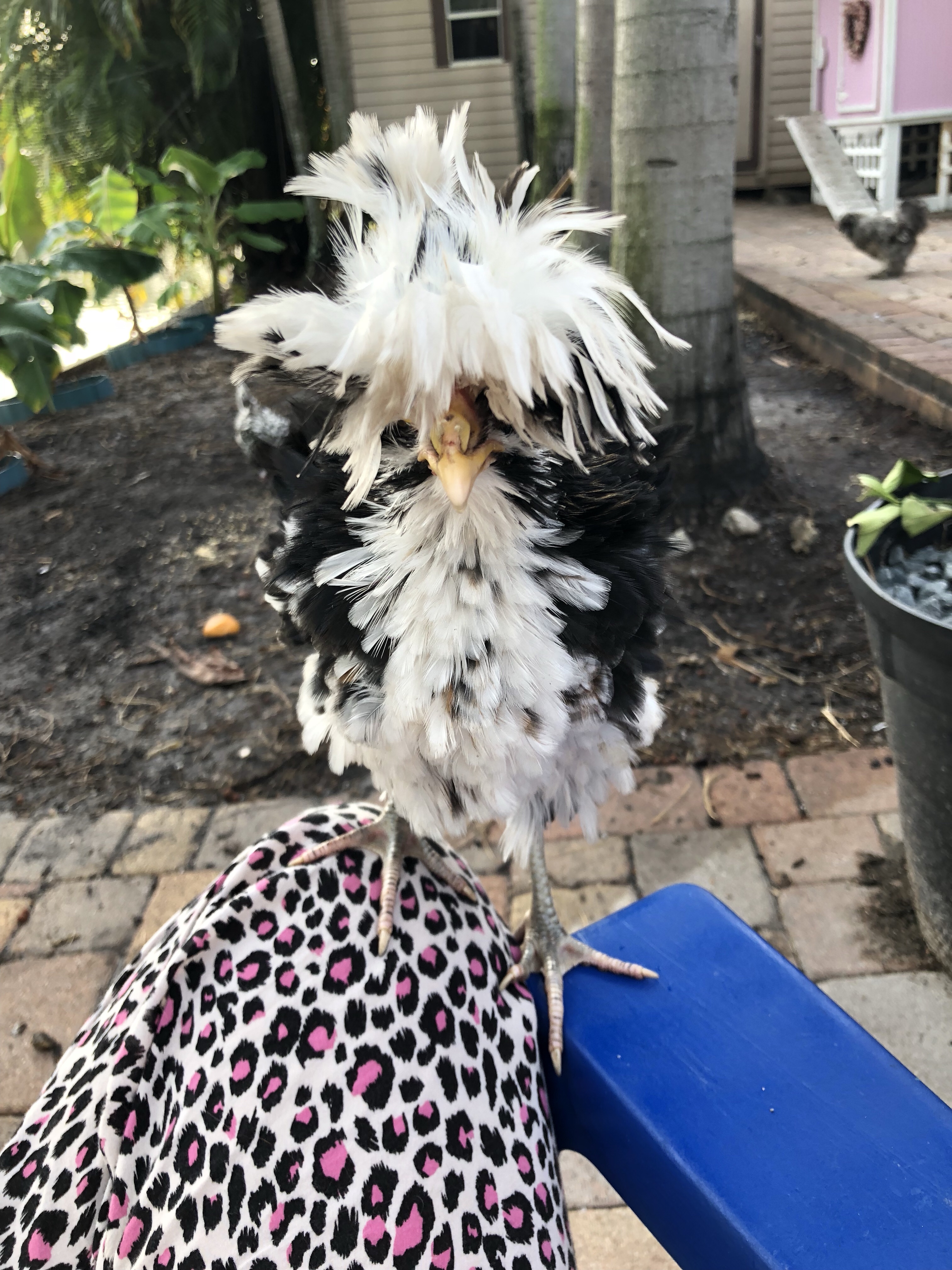 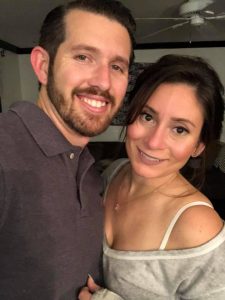